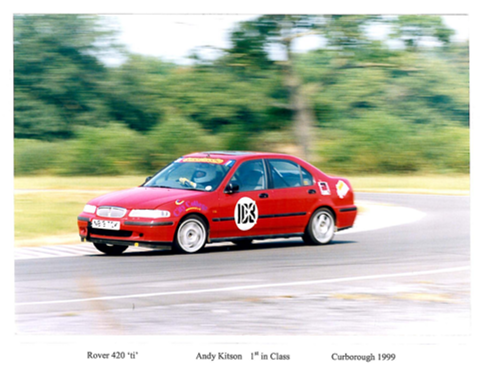 Appearances really can deceive. The rather straitlaced Rover 400 and the facelift 45 that followed, were competent cars. However, the MG Rover Group product plan for the MG ‘Z’ cars initially didn’t include the ZS. The relatively modern looking Rover 25 was quickly turned into the ZR warm hatch (actually a range with varying temperatures) and the high-quality Rover 75 soon picked up its skirts to become a ZT (including the V8 rear drive derivative). But the poor old Rover 45 was deemed too staid.

In the late 1990’s, I had proposed a team building project for the Chassis Development department and managed to secure an ex-test Rover 400 as a basis. (This replaced a Rover Metro/100; more of which some other time). We knew that the car had a rather sophisticated suspension system which responded well to tuning. A 200bhp T series turbo engine was a simple addition and the car was soon competing in sprints, hillclimbs, track days and even Santa Pod drag strip!

When we were given the task of developing the dynamic performance of the Z cars, an event was set up to create aspirational targets. Initial tuning parts were fitted to Rover 25 and 75 vehicles for ‘management’ to try, alongside some interesting competitor cars. It seemed rude not to include our trusty Rover ‘420ti’ just to show what could be possible!

The favourite car on the day? Lots of different opinions (and some shocked faces), but the Rover 420ti was the most surprising car – and very influential in changing the product plan to include what would become the ZS. Remember Tiff Nedell trying it on Top Gear? ‘’One of the best front wheel drive cars I have ever driven’’.

I happen to agree and confess that the ZS180 was my favourite of the Z cars. But even the best can be better. Our high quality Bilstein monotube dampers really enhance the dynamic performance, offering a much more mature ride with noticeably less noise and harshness. Those looking to improve the stance and reduce roll are now able to purchase the Xpower spring kit (in ‘OE’ early 2000’s bright green of course).

Appearances really can deceive. Not a bad result for the Rover ‘420ti’.